When I started UltraHeroix.com I knew I had to create a core cast of original super heroines. I already had Lady Ultra and Crimson Cat but I needed a third to complete a diverse "team" of super heroines.

Lady Ultra had super powers, Crimson Cat was a ninja and I felt like I needed a normal person in a heroine role. The thing that made her special that would help her keep up with the other heroines and villains is her intelligence. So, I decide to make her a tech-based heroine. At the time, I didn't have the time or budget to create a suit of armor (and it wouldn't look that sexy). So I looked at other famous superheroes for inspiration. Batman has his gadgets and even Spiderman has used his brains along with his powers to create tools to aid him.


I decided on the fly motif because I wanted to give her a unique look and a few different skills from the other heroines. I looked back other heroines and I came across Flygirl, who used to be a sidekick for the "The Fly" another superhero that was produced by Archie comics. From what I remembered, They just had wings and a gun in their crime-fighting duties. So, I felt this was something I could easily build off of and develop Dynafly into her own character. This heroine would have brains and a decent fighting background to make her a formidable opponent against villains. At first I felt she needed additional powers like bio-sting punches and ability to stick to walls but by the time I reached her second video, I realized that she didn't need them since she could fly with her wings and she could stun them with her ray gun. Some other things I added to her utility belt was handcuffs for defeated crooks and mini explosives for bigger tougher foes. 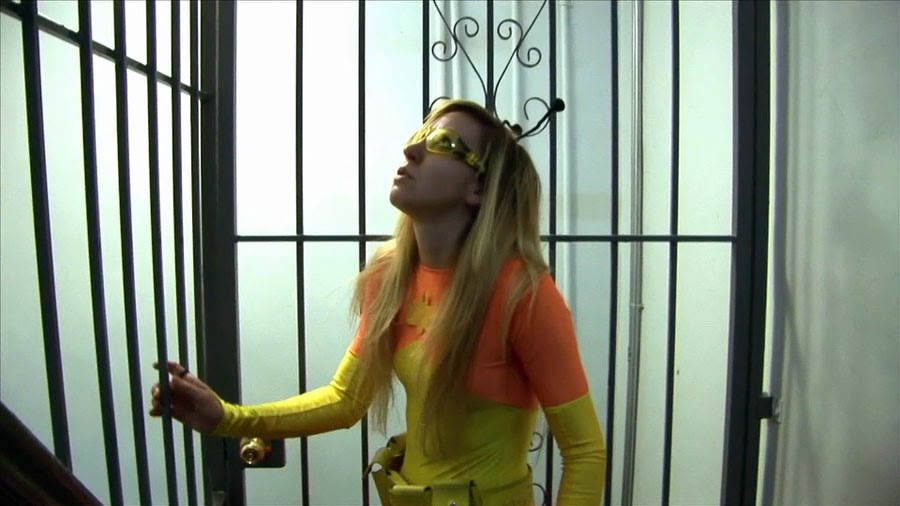 There has been 4 actresses to play Dynafly but there has only been 2 Dynaflys. The first Dynafly had a pretty short super heroine career before it was cut short by the first super villain, Dominator in "Ultra Domination" . Her name was Jane Jensen and she was inspired by previous super heroines to become one herself. Once she reached college she studied Physics and other sciences to compensate for lack of super powers and she created the identity of Dynafly. After encountering the Dominator, she retired due to her injuries and passed the Dynafly mantle to her sorority sister, Claire Ryder. Claire has a similar background and interests was easily able to assume the role and go further with it than her predecessor. She took over for "Shipping & Villainy" .
One of the things that I like about Dynafly is her perseverance. She has either been outnumbered or out-powered but never gives up, even when she is on the losing end. This really shows in her latest adventure as she fights for her soul in "Fly or Die"  after she was defeated and webbed up in "Fly Trapped". She is out-powered by a demon named, Grimskull and although she has been easily defeated in battle against him, she never gives up and uses her wits to try and survive.  Be sure to check out her latest adventure "Fly or Die" now at UltraHeroix.com and then her other adventures!
Fly or Die
Shipping & Villainy