We're going to take a look at "X-Men: Apocolypse". First off, I want to say that it looks like Fox Studios is slowly embracing the comic roots of their franchises. "Deadpool" was a massive success by embracing the comic history and fun so now it seems that they tried to put a little of that in the X-Men franchise. Unfortunately, little is not enough.

Right off the back, the background story seems to be a rehash of previous X-men movies. Magneto is disgusted with the world and Professor X tries to stop his old friend and make him see the error of his ways.

The main story focuses on the new main villain, "Apocolypse". Apocolypse was a ruler from ancient Egypt and he was possibly the first mutant. His powers made him seem like a god back then and he was feared.  His subjects eventually revolted and he was sealed away for thousands of years. He awoke to the year 1983 where he found the world was ruled by lesser un-powered beings so he forms a small group called "The Four Horseman" to take over. Meanwhile, Professor X is expanding his school to include more mutant students and we meet the younger versions of the core X-Men. Eventually, the young X-Men must take on Apocoplypse and his Horsemen to save the world. 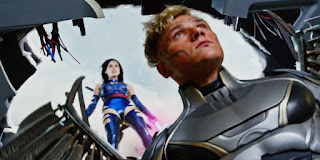 The new players were basically well played. I enjoyed the new actors who plays Storm, Cyclops, Nightcrawler and etc. While the returning actors did a great job in their established roles. I really enjoyed Olivia Munn as Psylocke. She was easily my favorite person/character in the movie. She looked the closest to her comic book counterpart playing the sexy but deadly mutant ninja (which is why you'll see more pics of her here).  You can also see that

Olivia is
having a lot of fun playing this character because it easily shows in her performance. I loved he costume and this was my favorite outfit of hers in the comic. 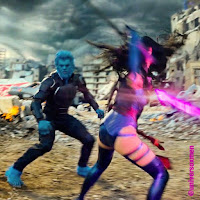 Another welcomed return was that of Quicksilver. He literally runs away with every scene that he's in and he quickly becomes and integral member of the team. We also get a quick cameo of Wolverine, his little side story was not well explained from the previous movie "X-Men:Days of Future past". His appearance was awesome but left more questions than what was answered. At least, this will serve as a bit of a taste in what we could expect in the final Wolverine movie with Hugh Jackman in that this was the bloodiest fight we've ever seen him in and it sounds like they want his final movie to have an "R" rating thanks to the success of the "Deadpool" movie.

A new addition that was cool and had the potential to be better was Jubilee. The actress did a good job but unfortunately there was too little of her and she didn't have much of an impact on the movie. I'm not sure what role she'll play if she even appears in new movies. 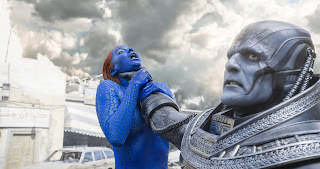 The major disappointments were that of Apocolypse himself. Physically he's not as intimidating or large as his comic counterpart. He doesn't show his true potential until the end of the film and even then it was still a little underwhelming. The other Disappointment was Mystique. Jennifer Lawrence returns to play Mystique but you could see that heart wasn't in it. She appeared disinterested and lacked the energy that she had in the past in the role.

As I mentioned in the beginning, the movie feels to be rehashing a to of the same stuff we've seen in the previous X-Men movies and at this point in 2016 we've seen quite a bit of superhero movie where hero has fought hero and ironically the four horsemen villains has spots filled by X-men heroes and now fills a bit old.

I think for the next movie, they should not hold back and totally embrace the comic roots. Have a new story that does not revolve around the Magneto/Professor X relationship, have more comic accurate/colorful costumes and a new director with a different vision. The Deadpool movie embraced it crazy comic roots and it paid off immensely. It set a new, higher bar that the X-men franchise has to meet.