For this installment I would like to do something different and recommend another Producer in the Super heroine genre which happens to be one of my favorites in this genre. HeroineMovies.com is the leading website for news on anything related to superheroine productions. All the info you could want regarding superheroine websites including our own ultraheroix.com .

They also produce their own superheroine videos including one of my favorite series called "Wonderful Girl". Wonderful Girl is a heavily inspired by the Wonder Woman character in which she wears a very similar costume and has similar powers and background and she is played by Hannah Perez. Hannah does a phenomenal job as the superheroine and sells her performance very well.  You could see and feel her  when she's at full strength and when she is at her most helpless. This series would not have been as successful without her as she really dives into the role and gives a stellar performance every time.

What really sets this series apart from others is how well it is produced, it looks like something you would see on television by the looks alone. The series has great fight scenes, cool stories and are a bit on the racier/erotic side. So if you have Wonder Woman fantasies then these are the perfect videos for you. These videos are produced and distributed at heroinemovies.com and are directed and edited by Damien Woods, who runs his own superheroine video website:  http://www.superheroinelimited.com/ and features his own original superheroines. 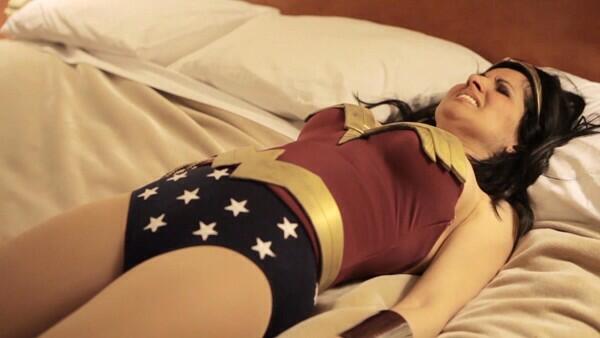 Be sure to check out the Wonderful Girl series at HeroineMovies.com, You won't be disappointed!