We had some sad news this week as Leonard Nimoy, also known as Mr. Spock from the original cast of Star Trek has passed away. He was always one of my favorite actors and played one of the most iconic characters of all time. He was ahed of his time and will be missed.

Which leads to the main topic of this post, the Star Trek heroine characters. There has been many heroine characters including Captain Janeway, Seven of Nine and Counsellor Troi but I would like to focus on the female characters of the original series. They had a few good action and perilous scenes but the thing I loved most was their sexy mini-skirted uniforms. 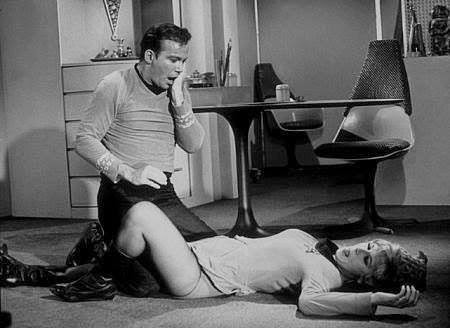 The first I would like to start with is my favorite Uhura. She was one of black characters in a main Science Fiction television show. She not only looked great but she had an active role on the show as one of the most important officers on the ship as the communication officer. She also took part occasionally as a member of the away team and actually had a few combat scenes. Unfortunately, it wasn't too often and she mostly stayed on the bridge but when she was in the action it was pretty cool. She even had a few peril scenes. The best episodes with her was "The Arena" and "Space Seed".

Janice Rand is another favorite, Her position was that as Yeoman and she acted more as an assistant to Captain Kirk. She was initially supposed to be a love interest for Captain Kirk but the show moved away from that and she was soon gone from the show. She had a few cool episodes including a peril-some scene in "The Enemy Within". 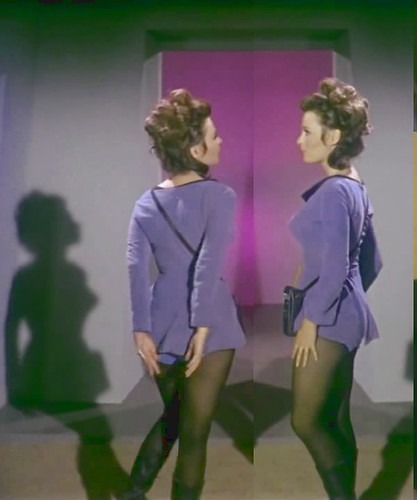 Another great Star Trek heroine is, Dr. Helen Noel. A psychiatrist that accompanied Captain Kirk on an away mission. They were investigating a mental asylum type base, where Kirk ended up being mentally manipulated and she played a pivotal role in beating the bad guys. There were a couple of perilous scenes including a brief but cool fight between her and a bigger orderly. Unfortunately, she was in only one episode but it is one of my favorites.


Another cool character is Nurse Chapel, Assistant to Dr. McCoy. She was in a lot of episodes assisting Dr. McCoy. She was played be Majel Roddenberry, wife of series creator Gene Roddenberry. Although she primarily played a minor role, she did have one episode where she beamed down with Captain Kirk. The episode was called "The Manuever". She also developed a crush on Mr. Spock that went nowhere.  There are other female character that played roles in the original episodes but I feel these heroines were the best. One of my major gripes is that there wasn't more episodes where the female officers played a more active roles in action and peril. That is one of the major reasons why I created a new character called "Luna Starr". Her character is heavily influenced by Star Trek but I wanted to add Flash Gordon element in that there is more action and peril. So far, UltraHeroix.com fans seems to enjoy it.  In this story, Luna Starr is investigating the disappearance of a fellow Space Agent. She comes across space pirates and she is soon fighting for her life as she tries to rescue her friend and bring the pirates to justice.

While creating this blog, I found some art on Deviant art by Themulator11, It is definitely worth checking out if you love seeing the Star Trek ladies in perilous situations.

*UPDATE* I also found new ladies of Star Trek, Thanks to the fan film series "Star Trek Continues". These are a continuation of the original Star Trek series done by fans today. The original characters are featured and a new one named, "Lt. McKennah" that acts as the ships psychiatrist. Despite being a Doctor, she does have some action in the episodes.  Check out their adventures here!  www.startrekcontinues.com