A Great Villainess, Diana from "V" 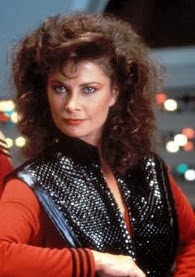 There are a few series that I could watch over and over again at anytime and have the same amount of enjoyment. One of these is the original "V" series from the Eighties and I'm including both miniseries and the 1st and only season of the show. This series is a lot of fun to watch, the mini-series were a bit deeper and thought provoking while the TV show had it's fair share of exciting stories and unpredictability.  There were a lot of twists in story lines and over the top characters  despite it limited budget and dated special effects by today's standards. A brief description of this series is that aliens arrive on Earth posing as friendly human looking explorers in need of our help but in reality they are actually a reptilian, war-like race that wants to steal our natural resources and sees humans as food. Soon, their true colors show and they try to conquer the world with their superior technology and all that stands in their way is a small rebellion of humans and a few compassionate aliens.

That storyline alone is pretty cool but what makes this show memorable and a joy to watch is  the main villain of the series...Diana. This character is so evil, vicious, sinister and over the top comic style bad guy that she practically steals every scene she is in. She has a lot of unique traits, One of which is that she  enjoys eating mice and other mammals...including humans. One of the most iconic scenes is when we get a glimpse of the true nature of the visitors (nickname for the aliens) when she eats a live hamster and as you can see in the picture above, under the fake skin is her true reptilian self.

This character is so conniving, not even her own allies or crew are safe from her aspirations for power. She kills her commanding officers if they get in her way and schemes to get rid of anyone that she doesn't like or possibly poses a threat to her power and that's with her own alien kind. For humans, her wrath is much worse. Besides simply eating us, she is also a scientist and revels in experimenting on humans. She dissects people physically and mentally. She takes great pleasure in mentally breaking her prisoners and turning them against their friends as sleeper agents. She usually lets others and subordinates do the dirty work for her but is not above shooting the enemy herself even if its to their back. Only on rare occasions does she willingly fight in hand to hand combat but when she does she is quite formidable. It should also be noted that due to her alien background, she does have some attributes that gives her something of a super-human abilities (by human standards). For example, she could spit acid that could blind or even paralyze her foes. She is also bullet resistant, I'm not sure if it's from the armor of her clothing or her skin but she has been shot by regular guns without being severely harmed.

One of the main things that makes this character so iconic and memorable is the actress that played her, Jane Badler. She captures the perfect villainess qualities and is so good, I can't imagine Diana being played by anyone else. Even when we had the new 2009 "V" series, the main baddie is Ana (inspired by Diana) was nowhere near as devious as the original which I think hurt that newer series. I believe even the producers knew then needed something to give that show a real shot in the arm and they brought in Jane Badler to re-introduce Diana. It was not the same Diana from the Eighties series but she had some of the same qualities. Unfortunately it would be a little too late and the show was canceled. I believed if they let Diana be Diana earlier in the series, it would have bought in more viewers and be much more fun t watch. As for my own productions, I've tried to think of a villainess as awesome as her and the closest I've gotten is Devla. I'm still going to try and create a closer character to this awesome villainess.
As I'm writing this blog post, I am watching the series on DVD. The SyFy channel used to play these as marathons but unfortunately haven't done it in awhile and it's not on Netflix nor Hulu at this time so the best way I'd say to see her and this great series is to get the full DVD series on Amazon.com.