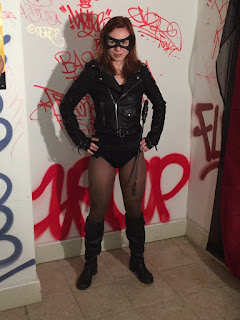 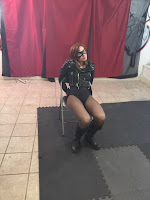 The Black Wasp in her civilian life is an investigative blogger. She reports on crime and corruption in her small city and does someting about it in her superheroine persona. She has developed allies in the police department who has become frustrated with corruption and feed her info and back up when she needs it. She is also supported by her neighbors and supporters of her website by providing funding and tech support for her superheroine activities. Although she has no super-powers, she uses her intelligence and fighting skills to make a difference in her city. Although still a rookie, she has become a force to be reckoned with. 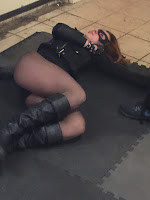 I was inspired by the character Black Canary and the superheroine show "Black Scorpion".

In her debut story, we have Black Wasp feeling confident, even a bit cocky from her victories fighting crime and petty criminals. Unfortunatley, she runs up against her first super villain, Deadeye! This veteran mercenary pulls no punches on the rookie superheroine as he pummels, captures and even shoots the Black Wasp. It might be a short career for the superheroine so be sure to check out her adventure at www.Ultraheroix.com