Everyone knows about the Linda Carter, Wonder Wonder Woman show and Batgirl from the 60's Batman show and those spurred most of us into being fans of the super heroine in peril genre.  But recently there has been a growing fan base for another television show called "Electra Woman and Dynagirl" and a lot of fans are enjoying stories based on those character on other super heroine related sites and videos.

But there is one super heroine who had not just one movie but two and and a television series that was chockfull of action, peril and sexy campiness..."Black Scorpion". 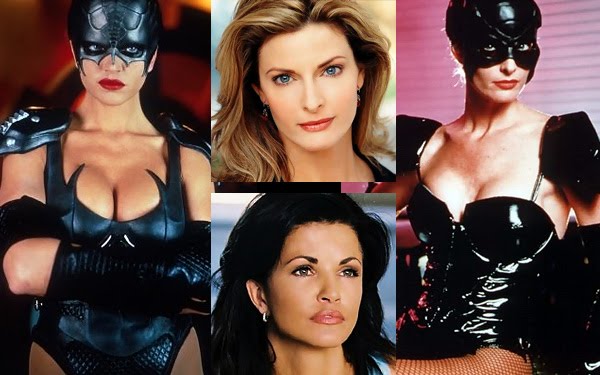 The origin of the Black Scorpion came from 2 Roger Corman movies based on the super heroine starring, Joan Severance who played a character named Darcy Walker, a police detective who felt ineffective in her work against crime and after suffering a personal loss becomes the super heroine "Black Scorpion" and uses her skills in martial arts and technology to fight evil.  The first movie had the origin story and a few great fight and knockout scenes with a pretty cool villain called "Breathe Taker", played by Adam West. I must admit that I was a little disappointed in the ending in which the final battle was over way too quickly and could have had more suspense due to a seemingly stronger villain in Breathe Taker.

Still, this movie was successful enough to spawn a sequel with Joan Severence returning as Black Scorpion. The sexy campiness was still there and the special effects was better than the first.

In my opinion, the first movie was better due to a better story, action and better peril. The second had hotter villainess but was lacking the action and peril the first one had. Thankfully, the movies proved popular enough to give us a live action series that was aired on the SciFi Channel. This is where things got awesome! They had a better looking actress playing Black Scorpion named , Michelle Lintl and the stories and villains were great. Black Scorpion had a lot of fight scenes where she was knocked out and held captive. There were even a few good unmasking scenes where the villains had her tied up and powerless. The villains were probably the best part, they had a lot of attractive villainesses and the male villains came off as powerful and threatening. One of my favorite scenes and one that I hope to recreate is where all the villains gang up on the heroine and she lays unconscious and helpless at their feet.
Unfortunately, this series only lasted one season due to low ratings but the whole series could now be seen on DVD and there is a digital comic series that I haven't seen yet but will check out soon.

I suggest all super heroine fans check out the movies and television series for this under-rated but extremely satisfying super-heroine and hopefully we could elevate her status as one of the best super heroine in peril characters out there.