I figured I'll start a new feature for this blog and do a character spotlight from time to time. It'll be a great way to give some background info on some characters and give light of what's coming up in future stories.

For this spotlight we'll showcase: Devla, The Vampire Sorceress 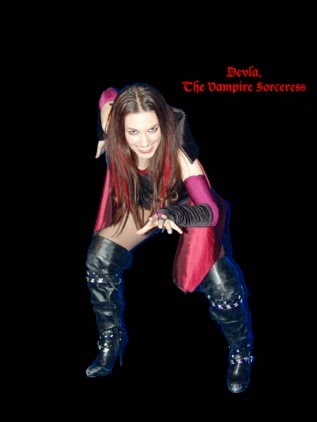 When I created Devla, I wanted a Villainess that was deadly but gorgeous. A villainess that could rival the power of my powerful heroines and not just in strength but in other areas that would be hard to defend against like magic. She would also be manipulative and use minions and other creatures to do her bidding. Finally, I liked the vampire aspect in that they are devilish but at the same time can also be sensual and seductive to their victims.

Here is her origin:

Devla began her life as a human/vampire hybrid. She had the powers of the vampire but could survive in the daylight like a human. Feared by humans and shunned by other vampires, she grew a hatred for all beings. She began her quest to gain power to rule the world of light and darkness. To do this, she would have to surpass the power of a vampire, so she studied the dark arts of magic and became an expert level of a witch.
As her power grew, she became a threat to the Royal Vampire families. Her body was slain but her her life essence was imprisoned for 200 years in a magical chest. The chest was eventually lost until it was found by an antique collector. It was stored in a basement and forgotten until a thief found it and unwittingly opened it and released Devla's spirit which took over the thief's body.
Since then Devla has been slowly accumulating power, moving from one host body to another and  building a legion of dark minions in her quest for world domination.
Strengths: Super strength, durability, mind manipulation, energy draining, magic and other common vampire attributes. Can survive in daylight. Can control monsters and other super-natural creatures.
Weakness: Although sunlight can't kill her, it weakens her. Has to drain energy and or blood regularly from victims to maintain peak strength. Vulnerable to magic. Due to her deceitful nature, there is a lack of trust between her and allies,  who may later turn against her. 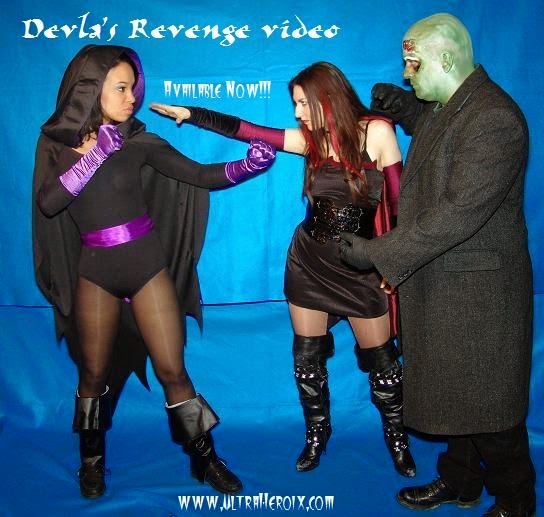 I plan to bring back Devla in a big way, she will have a new host body and more resources than just magic that may put Lady Ultra on the ropes...permanently.
Devla:Vampire SorceressReturn of Devla

You can check out her videos: Devla:Vampire Sorceress and Return of Devla at UltraHeroix.com
Posted by Unknown at 12:07 AM